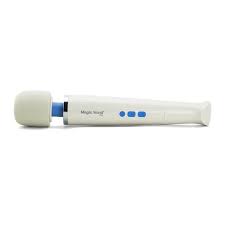 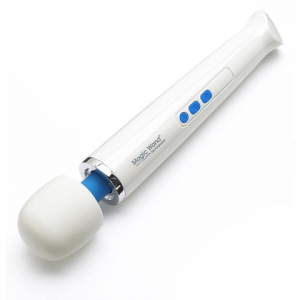 This does mean, however, that it’ll probably get quite a lot of demanding use, so you want to make sure you get the right one, with a high build quality and enough features. This review explores the Magic Wand Plus, to see if this new version of a classic wand still meets up to the hype!

It’s fairly simple, which is no bad thing at all – an abundance of buttons and numbers aren’t exactly a turn on for most people – this has just 3 buttons. An ‘On/Off’ button, a ‘+’ button and a ‘-‘ button. Using these, you can switch it between its 4 settings, the highest at 6,300 RPM. It’s pretty powerful, the highest setting should be enough for most of your needs, allowing for deep-tissue massages as well as sexual stimulation.

It isn’t cordless – it has a 3.2 ft detachable cable, which could be a no no in some people’s books. Really, it’s down to personal preference. On the one hand, it’s nice not to get tangled up in a cable, especially when it’s cold, but on the other, there’s nothing worse than running out of battery just when things are getting heated. I personally don’t mind the cable, and find you get used to it quite quickly, but it’s worth considering!

One thing it isn’t is waterproof. It’ll be fine with lubes and wipe downs, but it can’t be submerged. If you want something that can do water well, this isn’t it, but I think for most people it won’t be a problem!

The build quality, as you’d expect from such a well-established company, is good. And for something that’ll potentially get a lot of hard use, that’s big plus in my books. In addition to that, if it does happen to break, the Magic Wand is covered by a one-year warranty, some peace of mind you get from buying from an established brand!

At $119.99, it’s not the cheapest you can get, but also definitely not the most expensive. Given how many uses you can find for it, and how much pleasure it can bring, I’d say it’s a good investment. With the build quality and manufacturer’s warranty, I have to say, give it a go – I don’t think you’ll be disappointed.

Whilst it is more expensive than other smaller and cheaper vibrating toys on the market, there’s no denying that you get everything you pay for when indulging in this magical invention!