What are nipple clamps for (and how do you use them)?

Okay… So what actually are nipple clamps?

Nipples can be very sensitive and as you, hopefully, know, are one of the key erogenous zones for humans and introducing a nipple clamp into the bedroom (or wherever you like) is a great way to get those juices flowing.

Oh, and did I mention they come in loads of different shapes and sizes, and some even vibrate!

You’ll hear of couples, singletons and even groups whipping out the clamps for even more fun during solo-play, foreplay and intercourse. And ever since the release of the much-loved 50 Shades of Grey, the demand for these clamps have rocketed and it isn’t slowing down…don’t mind if I do Mr. Grey.

Interestingly, nipple clamps have been around for centuries, with the first documented use all the way back in 1790! I can see it now, good old Benji Franklin in the thunderstorm with his kite, a key and… nipple clamps? I mean it’s fair to say it would have made his ‘discovery of electricity’ much more…interesting.

But don’t panic, we’re not suggesting you head out into a thunderstorm with your nips clamped…unless, of course, you’re into that.

Are nipple clamps meant to be painful?

The short answer is no. Nipple clamps are designed to invoke varying, controlled levels of pressure: ranging from a very light sensation to an intense grip. Whether a nipple clamp is painful or not entirely depends on the nipple clamp you chose and overall, what you’re into.

Choosing the right type of nipple clamp is key in delivering the sensation you’re after. For example, if you have sensitive nipples you may find a certain style of nipple clamp delivers more of an intense feeling and so is more likely to feel painful. If this is the case you may want to opt for a tweezer clamp which will allow you to easily ‘fine-tune’ the clamp to your desired pressure.

If your nipples are more robust however, and you’re after more of an intense feeling you can opt for a weighted clamp, a clamp with teeth or even a magnetic clamp to find your perfect pinch.

With so many nipple clamps available, it can be a bit daunting trying to find the right type of clamp for you. Luckily for you (and me) we have tested out some of the many types of nipple clamps on the market. And have put together a guide on how to introduce yourself into the wonderful world of nipple clamps.

How to use nipple clamps for beginners

It is important to find a nipple clamp that is comfortable, easy to use and most importantly, give you the right amount of pleasure. From tweezer clamps to the crocodile clamps, vibrating clamps to magnetic clamps, you’re bound to find a clamp that packs a pinch. 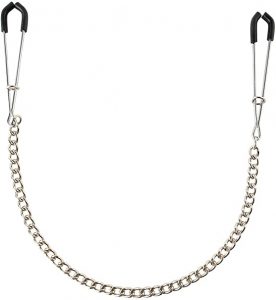 Let’s start with the most popular style of nipple clamp: the tweezer. Tweezer clamps are probably the best clamp to begin with if you are new to nipple play. They are easily adjustable, so you can experiment with varying levels of pressure, depending on your preference.

Additionally, tweezer clamps usually come with a rubber tip, not only is this a comfortable addition, the rubber makes the clamp easily removable if things start to get a bit intense for you.

Like many other clamps, these bad boys come in lots of fun colours and shapes too…tweeze me baby! 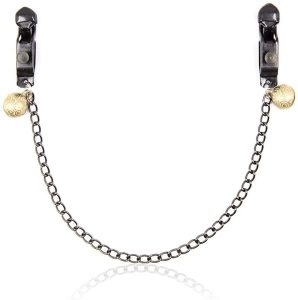 Next up…the crocodile clamp. You know the saying, never smile at a… well this isn’t the case for these beauties, they are sure to leave you satisfied and smiling. Typically crocodile clamps aren’t recommended for beginners due to the fact they are a little more difficult to adjust. If you are looking for something a bit more intense, the crocodile clamp could be the answer. For even more kink you can opt for a clamp with teeth or a vibrating clamp. 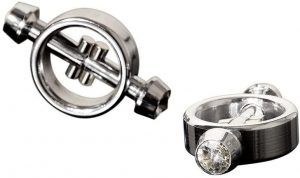 Fancy something a little different? Why not try magnetic clamps? Not only are they incredibly discrete, they are sure to give a very intense sensation. These clamps aren’t adjustable but that doesn’t mean they aren’t versatile…who says nipple clamps are just for nipples? Spice things up further by using these to clamp the frenulum, labia or balls.

Once you’ve chosen your desired clamps, the next thing to do is actually give them a go!

As always, make sure you’re in an environment in which you feel safe and comfortable, whether that’s alone or with a partner(s). Start off slowly…begin with the lightest pressure your clamp can provide and work your way up. If it starts to become painful, stop, don’t feel like you have to work through the pain. Nipple clamps should be enjoyable, even if you enjoy pain, know your own limits.

Nipple clamps are an amazing way of introducing a new sensation during foreplay and intercourse.

Once you’re familiar with your nipple clamps why not experiment with something a little different? There are many nipple clamps that come with a little something extra, like a nipple/clitoral clamp combo or even a ball gag nipple clamp.

It’s clear there are so many new things to try when it comes to nipple play, so what’s stopping you…get clamping. You can also see our guide to nipple clamps for beginners if you’re looking for some direct recommendations! 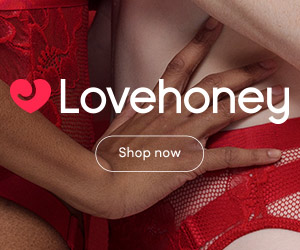